Pedal Brain produces an iPhone accessory that logs a range of data for competitive cyclists and uploads it onto the web where it can be viewed by coaches and teammates. Pedal Brain goes far beyond simpler applications that rely only on the phone’s GPS for data by using the ANT+ technology to collect data on speed, distance, heart rate, cadence and power from ultra-low power wireless sensors. The Pedal Brain application runs on the iPod to show how the cyclist is performing in real time, and the cyclist can log into the Pedal Brain site later to get more detailed analysis. Pedal Brain offers an integrated platform for coaches who can track the cyclist’s progress and plan his or her workouts. Teammates and fans can view the position of racers from a computer or iPhone.

A critical part of Pedal Brain is the plastic bracket that mounts the iPhone to the bike so that it can be easily viewed by the rider. The vast number of bicycle models on the market, as well as variations in handlebar stems, mounts, lengths and rises means that Pedal Brain must make a large number of brackets to fit. Racers or other high-end cyclists often ask the company to make a special bracket to fit their requirements. These brackets require a considerable amount of testing to determine if they provide the right fit and function.

In the past, Pedal Brain sent its designs to contract manufacturing companies that built prototypes using stereolithography and several different molding methods. It typically took these companies about a week to make the prototype and the cost averaged $300. “The time required to make prototypes previously hampered the design process,” said Matt Bauer, President of Pedal Brain. “By the time we received them we often already had a better design idea. Often several iterations were required which meant that it could easily take a month to finalize the design. Another problem with the purchased prototypes is that they were fragile so that whenever we used them on a bicycle we were very concerned about breaking them and interrupting the design process.” 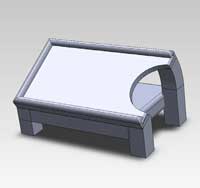 Matt Havekost of Advanced Technology Systems, a Stratasys reseller, recommended that Pedal Brain purchase an FDM machine. “I pointed out that FDM would enable Pedal Brain to make their own prototypes faster and at a lower cost,” Havekost said. “I also mentioned that the grade of ABS used in FDM is much stronger than the materials they were using. Finally, I showed them that the FDM machine could run on 120 V power and operate reliably through the night without any supervision.”

“FDM has substantially improved our design process by enabling us to go from concept to reality in about two hours at a cost of $10 for the typical part,” Bauer said. “This gives us the chance to try out many more ideas and experiments with the result that we have been able to steadily improve the performance of our brackets. Another important advantage of FDM is that it provides a stronger grade of ABS, which means we no longer have to worry about the prototypes breaking. For one-of-a-kind custom brackets we can now use the prototype as the finished part. We make an FDM reverse image of the part for use as a carbon fiber mold to build more test parts. We send the prototypes to the person who is designing our electronics, which helps them do a better job. All in all, FDM lets our creative side run wild by trying as many different ideas as we want without worrying about the cost and time of making prototypes.”